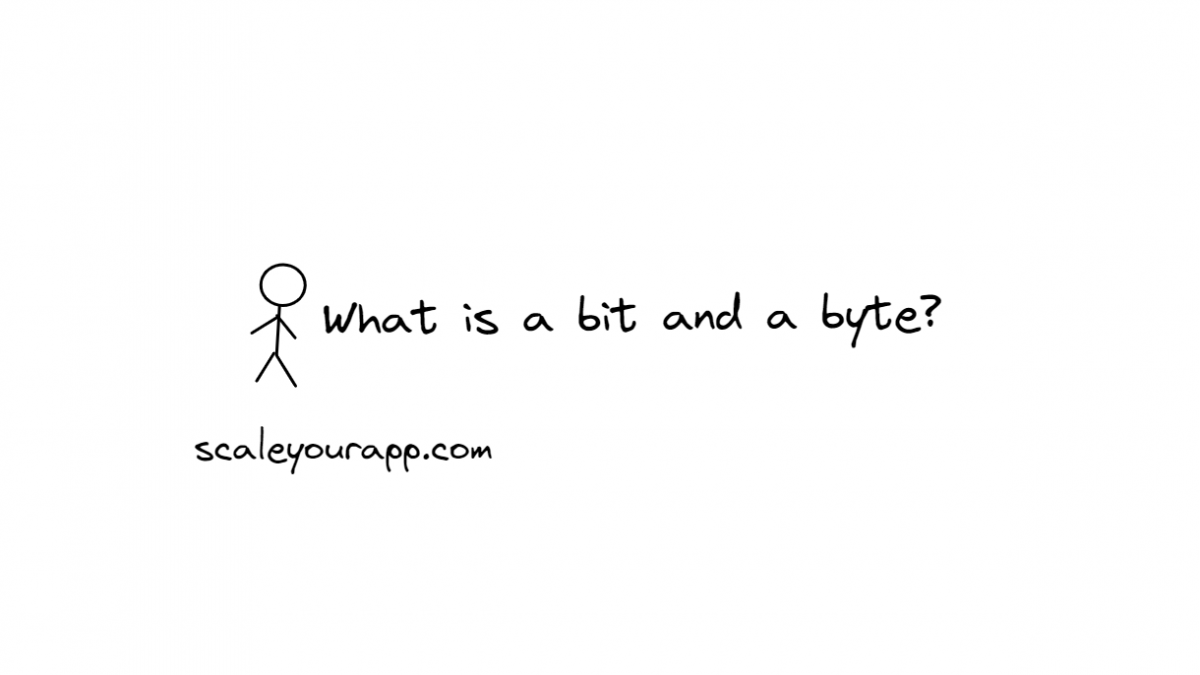 What is a Bit? & A Byte? – A Helpful Guide In Simple Words

Hey!! How are you doing?
Welcome to scaleyourapp.com
Today we are talking about the fundamentals… About the Bits & the Bytes.
What is a bit? & what does it mean in computing?

“This line you just read” uses somewhere around 400 bits of storage memory.

There are so many instances in our day to day tech-savvy lives where we come across these terms’ bits & bytes. Like my internet broadband connection has a network bandwidth of 1 Megabit per sec. My computer has a 64-bit processor. The internet speed cannot support a high definition streaming bit rate & so on.

Bits are everywhere but what does it really mean?

So, without any further ado let’s delve into it.

Bit stands for binary digit. That’s the full form of Bit. It’s binary either 0 or 1. Just the two digits. No more digits required.

Our computing devices are smart enough to make sense of the combination of just these two digits to process humongous amount of information.

A bit is the atomic, smallest, the most basic unit of data/information which is expressed & communicated in computing. Also, in telecommunication. Our computers run machine instructions and process data in form of bits.

Most of the devices treat 1 as a logical true value & 0 as a logical false value. If you have written code anytime in your life you might be aware of the boolean data type – 1 for true & 0 for false.

Ok, now we sort of know what is a bit. What is a byte exactly?

Historically, byte was used to represent/encode a single character of text in a computer. Consequently, the computer architectures took byte as the smallest addressable unit of memory in computing.

In computers, the most common storage unit is a byte. Storage devices like hard drives, DVDs, CDs, USB sticks all have capacities in the form of bytes rather than bits.

Majority of the programming languages use bytes to store the primitive data types. Let’s take Java for example.

short data type takes 1 byte to get stored in memory. Similarly, an int primitive data type takes 4 bytes.
A long data type needs 8 bytes of memory. A boolean as stated earlier is just one bit of memory that is 1 true & 0 false.

3. What is the difference between a bit & a byte?

Let’s jog our memory amigos. What did I tell about this?

Though for a layman like me byte is generally denoted with an uppercase B while a bit is denoted with a lowercase b. Next time pay attention while choosing your data plan. 🙂

Besides computing, Bit is also used in telecommunication, used to indicate the network speed. It is also known as the bit rate. Higher the bit rate more stuff we can do online. We always need a high bitrate to stream our favourite movies on Netflix or to stream PUBG on Twitch.

4. What is the meaning of 1 Mbps? How are broadband speeds measured?

Mega means 1 million. A connection of 1 Mbps will have a bitrate of 10 to the power of 6 bits per second. Ideal for browsing online & watching youtube videos but not for streaming gaming videos or binge-watching Netflix.

So, say you have a broadband internet connection of 10 Mbps Megabit per second, how much time, do you think, will a file of 10 MB Megabyte take to download?

1 Megabyte is 8 times 1 Megabit. So, the file should ideally take 8 secs to download.

Back in the day, when we had those 16-bit Mario game cartridges. Megabit was used to measure the size of the chips.

Ideally, it depends on the computer architecture. But if we assume 1 char is of 2 bytes. And the word is of 5 characters, meaning 10 bytes in total.

6. How are bits stored in a computer memory?

At the lowest level, any information is just a series of 1s & 0s stored in a magnetic region of a hard drive in a computer. Also, when writing memory efficient programs, it is important for us to know how the data is stored on a computer.

At the time of Microsoft XP, we had like 32-bit systems but over time with technical advancements, 64-bit computers became a norm.

The 32-bit & 64-bit terms signify the amount of information a processor can process at a point in time.

If you are an avid gamer and had been installing state of the art games on your pc you know what I am talking about. We often checked in the minimum requirements description of the games if the game would run on a 32-bit or a 64-bit hardware.

64-bit processors are much powerful than 32-bit ones. They can comparatively perform a lot more significant number of calculations per second, process a large amount of data etc.

We today have so much advanced operating systems made possible by the 64-bit processors & more availability of RAM to process data at flash-like speed. Also, 64-bit systems can also run programs written for 32-bit systems. So, they are kinda backwards compatible. Of course, to some extent. Really old setups do face some issues in running on new hardware.

Thanks to the 64-bit systems we have so cool next level video games like GTA5, Spiderman, Farcry5 to blow our minds off. Video games, I can keep talking the entire day about it ?

8. What is the relationship between Bit, Byte, Kilobyte, Megabyte, Gigabyte?

Let’s compare the units & get a sense of them by having a look at some real world day to day examples.

More on the Blog

How Long Does It Take to Learn JavaScript & Get A Freakin Job?

Ohk, Guys!!
I think this was pretty much it about bits & bytes. If you are not into some serious research on this topic, I think this amount of info will suffice to have a fundamental understanding of how low-level data is processed in computing.

Did you like the article? I don’t know. Maybe you didn’t or is it? Do let me in the comments. I would love to read & respond to your comments. Any amount of feedback would be really meaningful to me. Also, do share it with your friends.

See you in the next article.
Until then…
Cheers!!