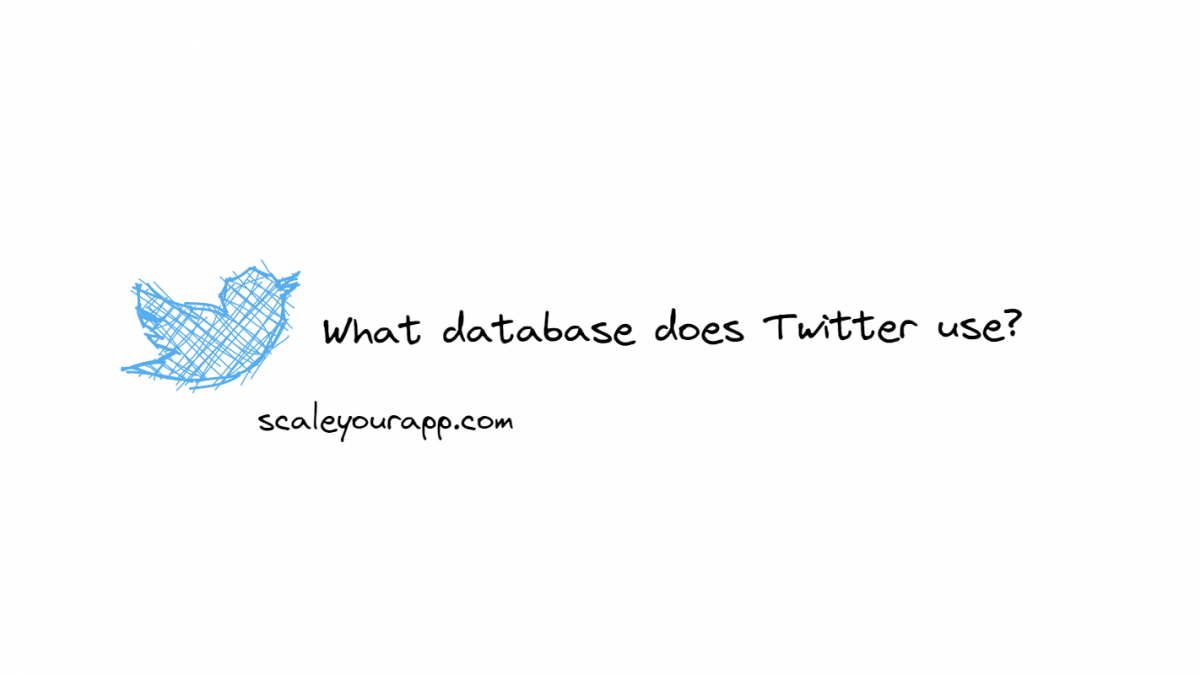 This write-up is a deep insight into the persistence layer of Twitter. It does answer all our questions about it in-depth such as What database does it use? Is it SQL, NoSQL, a polyglot persistent system? How does it store hundreds of millions of tweets sent every single day?

I’ll begin with the short answer first, list out the databases & then will talk about each one of them in detail.

So, without further ado.
Let’s get on with it.

Now let’s talk about all the data stores individually.

Twitter runs one of the biggest Hadoop clusters in the world. Hadoop was originally used at Twitter to take MySQL backups & then over time its use cases on the platform grew by quite an extent.

150K+ services & 130M containers are running on any regular day.

To scale the services Hadoop uses different namespaces. The nodes with namespaces, also known as Namenodes, run independently & have no dependence on each other.

To manage the namespaces, View file system is used, which is useful for managing clusters having multiple Namenodes.

Every cluster has more than 3500 Namenodes.

Manhattan is a real-time multi-tenant scalable distributed database used at Twitter to serve millions of queries per second with really low latency being highly available.

It stores user tweets, direct messages, account details & much more. On any given day, Manhattan clusters handle 10s of millions of queries per second.

A lot of resources were spent on managing & trying to stoke up the performance of the existing storage systems. This prognosis wasn’t good, the existing persistence system wouldn’t have worked in the long run. Which led to the development of Manhattan.

The requirements to build Manhattan were simple like having a reliable datastore with predictable performance, availability, extensibility, easy operability working with hundreds of thousands of nodes & scalability.

Manhattan is separated into four layers interfaces, storage services, storage engines and the core with an eventual consistency model.

The storage engine of Manhattan was designed in-house with a pluggability feature to enable plugging of any external storage engines if & when required in future.

It is a highly performant system capable of serving images in low tens of milliseconds while having a throughput of hundreds of thousands of requests per second.

When the image is uploaded to the Blobstore, it synchronizes the image across all of Twitter’s data centres with the help of an asynchronous queue server.

With it’s caching Twitter delivers approx. 120 GB of data per second to the clients.

The platform has hundreds of cache instances having over 20TB of data in-memory from over 30 services. Comprehensively, the caching layer serves over 2 trillion queries on any regular day.

The first is the obvious one, having in-memory data to avoid database hits. The second, it is used as a memory buffer to store items that are expensive to compute over and over.

Twemproxy, a lightweight proxy for Memcache & Redis protocol, enables the caching layer to scale horizontally minimizing the connections to the backend caching servers.

There is another caching service, Haplo which acts as a primary cache for the Twitter Timeline. It’s backed by Redis.

Twitter started with MySQL as the primary data store, from a single instance the persistence layer grew to a large number of clusters.

Twitter has one of the biggest deployments of MySQL right from its inception. It has MySQL clusters with thousands of nodes serving millions of queries per second.

MySQL has primarily two use cases

It is based on Apache Mesos. Mesos enables Mysos to schedule, monitor & communicate with MySQL instances in the cluster.

MySQL instances were sharded with the help of a framework for creating distributed datastores called Gizzard.

Cassandra was also used with MySQL as a data storage solution but it lacked the auto-increment feature which MySQL had. It did store metrics for a while & was later deprecated after Twitter started using Manhattan.

Metrics DB is used at Twitter to store the metrics. The metric ingestion rate is more than 5 billion metrics per minute with 25K query requests per minute.

Originally, Manhattan was used as the metric storage database but Twitter faced scalability issues along with not having support for additional minute metric tags.

This led to the development of Metrics DB in-house using the compression algorithm of Facebook’s in memory Time-series Database Gorilla.

Twitter used it to store, social graph, information such as who follows whom & stuff. But the GitHub repository says that Twitter is no longer maintaining this project. I am not sure if they still use it to store their social graph.

Source for this write-up;

How does YouTube stores so many videos without running out of storage space?

How Does PayPal Processes Billions of Messages Per Day with Reactive Streams?

What Is an Instance In Cloud Computing? - A Thorough Guide