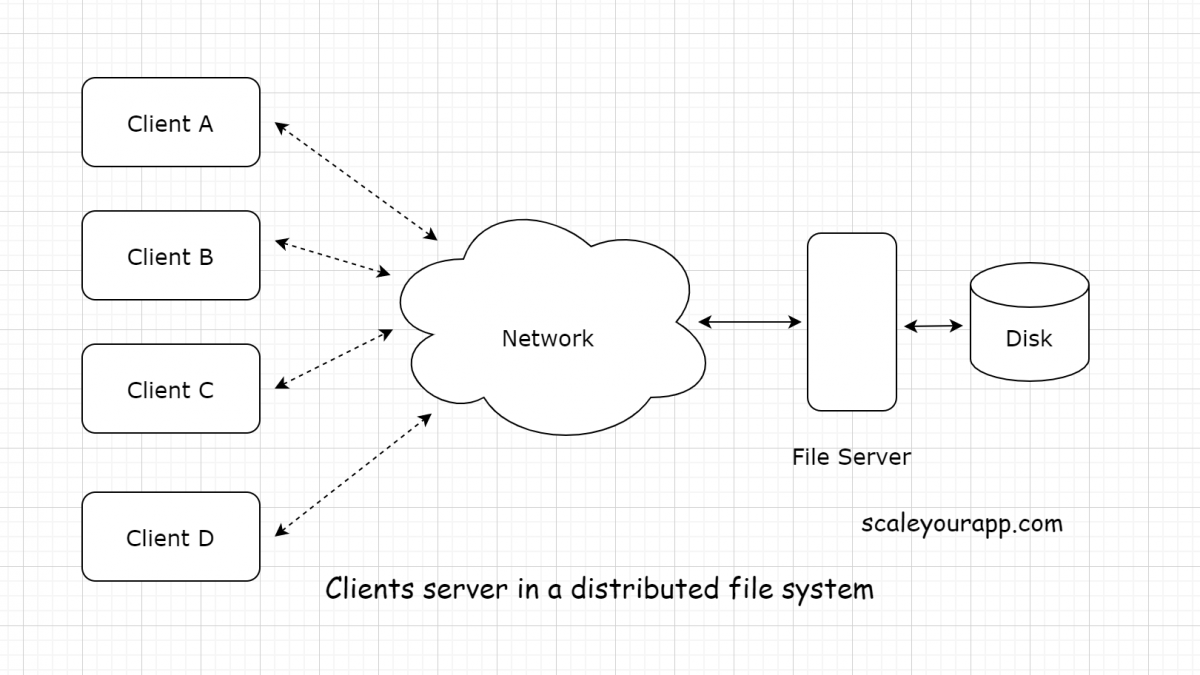 NFS being an open protocol enables third parties to write their own implementations of it. Multiple vendors today offer their own versions of the network file system.

In a distributed file system, one or a few servers serve multiple clients. The server stores the data on the disk and the clients fetch the data from the server through the network.

With the help of a distributed file system, the clients can access the data residing on the server disks remotely as if the data lived in the local disks of the respective clients.

But, why not store the data in the local disks of clients cutting down the network bandwidth due to the data fetch operations? Why keep it in the server centrally?

Saving data in a single of a few servers enables it to stay consistent. Imagine clients holding their respective data and performing regular updates to it locally. This would make data largely inconsistent across the network. Every client will hold its own version of the data, which is what we certainly don’t want.

When the data is consistent, it can be easily shared across clients without any fuss. Also, it can be backed up easily when residing in a few servers as opposed to a significantly larger number of clients. Additionally, holding the data centrally in a server makes it more secure.

The client-side file system holds the response data in its buffer/local memory and provides the data to the client.

Now, if the client would want the same data in the near future, the client file system will serve the data from the buffer cutting down the network traffic significantly.

This was an overview of the distributed file system, now, let’s move on to understand the network file system.

The primary focus in the development of NFS was quick and simple server crash recovery. As a result, the communication protocol between the client and server was designed stateless just like in a REST API communication.

Imagine a scenario where the client and the server share some state during the communication. The client sends a request to the server for a certain file with an id X. The server processes it, returns the response and crashes.

The file id that the server held is lost. And then it comes back up again before the client issues a second request for another file, related to the initial file with id X, without giving the file id X, hoping the server would understand the context.

But since the server crashed, it lost the original file id and is confused now.

Here is another scenario, since a file in a server is accessed and updated by multiple clients, a client has to send separate open and close file system call requests to the server to inform it that the client is done editing the file and can be accessed by other clients in the network.

Now, if a client crashes during the file edit, the server doesn’t know what to do. Does it keep the file locked, wait for the client to come back online, or allow other clients to update it?

The best bet in this scenario is to not carry over the state in different request-response cycles. In a stateless protocol, the server would hold no information on the client. Every request response is treated as a new one.

So, on the client crash, the client can retry the request anew when it comes back up again. While the original request would be discarded by the server.

This is why stateless request-response cycles are implemented in a network file system. Every client request contains all the information that the server needs to provide the response, making things less complicated.

So, how is this stateless protocol implemented?

A key element in understanding network file system design is a file handle. A file handle uniquely identifies the file or the directory a particular operation will run on. This makes it an essential component of a stateless NFS client request.

A file handle, in turn, consists of three components: a volume identifier, an inode number, and a generation number.

The requests in the NFS are idempotent. This means the effect of multiple duplicate requests will be the same as the original request. The system is designed in a way that duplicated requests don’t end up leaving it unstable.

This enables the clients to retry requests multiple times if they don’t receive the response within a stipulated time.

And there can be multiple reasons behind clients not receiving a response: server crash, network dropping the request, response and so on. In these scenarios, NFS enables the client to retry the request.

Developer Roadmap
If you are a developer and find it hard to cope with constant changes in technology. You are sick and tired of it. You are looking for ways to jump off that endless upskilling treadmill staying relevant and hireable.

You might want to check out my ebook, DEVELOPER’S ROADMAP TO EXCELLENCE AND BUILDING YOUR OWN THING, where I share with you the roadmap and techniques that I follow to keep my sanity in this ever-changing world of software development without killing myself. In it, you’ll find actionable advice and critical points that will enable you to make informed career decisions and accelerate your career at MACH speed.

The network file system focuses on client-side caching, to cut down all the unnecessary network calls to improve its performance.

Clients in an NFS cache the response from the server to avoid re-sending the requests for the data they have already requested earlier. Also, the writes in the file are made on the client-side and the updated file is then sent to the server as opposed to being edited directly on the server. This improves the write performance of the network since the server is free to deal with other requests while the clients perform the file writes locally.

Though client-side caching improves the network performance significantly, it has a side-effect: a cache consistency problem.

Imagine a scenario where a client, let’s call it A, reads a file X in the network and caches it in its local memory. Another client B performs an update to that file X on the server and caches it. Here we have two versions of the same file: one which the client A holds and another on the server and with client B.

And then there comes another client C, that wants to access the same file X from the server. I believe you can sense the storm brewing.

Now client C pulls the file, performs some writes, caches it and updates it on the server. At this point, clients A, B and C all have different versions of the same file. This is the cache inconsistency problem.

To deal with the cache inconsistency problem, the clients need to verify if the data they have cached is consistent with the data on the server.

If not, the cache needs to be invalidated and the updated data should be fetched again from the server.

So, naturally, this technique is not viable.

If the client checks with the server for data consistency at stipulated intervals continually, it would avert the need to verify with the server every time a client intends to use data stored in its local cache. Thus cutting down network calls. Though, even this technique will exert some additional load on the network and also does not eradicate the cache inconsistency issue by cent percent.

Thus client-side caching is more of a design-tradeoff and largely depends on the frequently of writes the data has.

All the write operations abiding the NFS protocol are synchronous. After the client completes the data modification, it can assume that the data has been written to stable storage.

Stable storage means storage that is resilient to software crashes or power failure. This is generally achieved by replicating the disks or using RAID (Redundant array of independent disks).

If you are interested in learning computer networks, check out Grokking Computer Networking for Software Engineers on Educative.io.

Educative.io is a platform that helps software developers level up on in-demand technologies & prepare for their interviews via interactive text-based courses with embedded coding environments. They have over 950,000 learners on their platform.

This is an affiliate link. If you buy the course or a subscription, I get a cut without you paying anything extra.

Let’s discuss the factors affecting the performance of a network file system:

We’ve discussed caching earlier, how NFS leverages the client and the server-side caching to cut down the server and disk load, respectively.

We can also augment the caching capacity on both the client and the server to further improve the performance of the network.

Augmented caching on the server will avert the need to send I/O requests to the disk often.

In a network file system, a proxy server can be set up in front of the origin server to intercept all the requests from the clients.

The compute power of both the client and the server in the network file system directly affects the rate of request-response processing/throughput in the network. With augmented CPU power, the server can process a larger number of client requests in a stipulated time.

A poorly configured network could reduce the throughput significantly. The network should be tolerant of lost packets, server time-outs, etc.

Well, Folks! this pretty much sums up network file systems. If you found the content helpful consider sharing it with your folks.