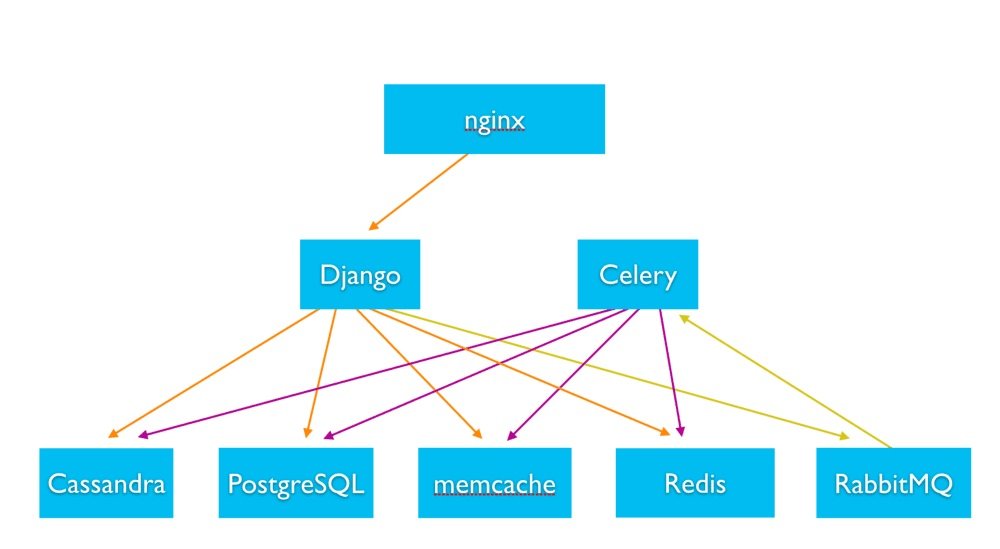 Instagram is the most popular photo-oriented social network on the planet today. With over a billion users, it has become the first choice for businesses to run their marketing campaigns on.

This write-up is a deep dive into its platform architecture and addresses questions like what technologies does it use on the backend? What are the databases that the platform leverages? How does it store billions of photos serving millions of QPS (Queries per second)? How does it search for content in the massive data it has? Let’s find out.

The server-side code is powered by Django Python. All the web and async servers run in a distributed environment and are stateless.

The backend uses various storage technologies such as Cassandra, PostgreSQL, Memcache, Redis to serve personalized content to the users.

RabbitMQ and Celery handle asynchronous tasks such as sending notifications to the users and other system background processes.

Celery is an asynchronous task queue based on distributed message communication, focused on real-time operations. It supports scheduling too. The recommended message broker for celery is RabbitMQ.

RabbitMQ, on the other hand, is a popular open-source message broker written using the AMQP Advanced Messaging Queuing Protocol.

Gearman is used to distribute tasks across several nodes in the system and for asynchronous task handling such as media uploads, etc. It’s an application framework for distributing tasks to other machines or processes that are more fit to execute those particular tasks. It has a gamut of applications ranging from highly available websites to the transport of database backup events.

> Master the concepts involved in designing the architecture of a web application.
> Learn to pick the right architecture and the technology stack for a use case.
> Stand out amongst your peers with a clear understanding of software architecture.

Check out the course here

Computing Trending HashTags On The Platform

The role of the nodes is to consume a stream of event logs and produce the ranked list of trending content i.e. hashtags and places.

The pre-processor node attaches the necessary data needed to apply filters on the original media that has metadata attached with it.

The parser node extracts all the hashtags attached with an image and applies filters to it.

The scorer node keeps track of the counters for each hashtag based on time. All the counter data is kept in the cache, also persisted for durability.

The role of the ranker node is to compute the trending scores of hashtags. The trends are served from a read-through cache that is Memcache and the database is Postgres.

PostgreSQL is the primary database of the application, it stores most of the data of the platform such as user data, photos, tags, meta-tags, etc.

As the platform gained popularity and the data grew huge over time, the engineering team at Insta meditated on different NoSQL solutions to scale and finally decided to shard the existing PostgreSQL database as it best suited their requirements.

Speaking of scaling the database via sharding and other means, this article YouTube Database – How Does It Store So Many Videos Without Running Out Of Storage Space? is an interesting read.

Hive is used for data archiving. It’s a data warehousing software built on top of Apache Hadoop for data query and analytics capabilities. A scheduled batch process runs at regular intervals to archive data from PostgreSQL DB to Hive.

Vmtouch, a tool for learning about and managing the file system cache of Unix and Unix-like servers, is used to manage in-memory data when moving from one machine to another.

Using Pgbouncer to pool PostgreSQL connections when connecting with the backend web server resulted in a huge performance boost.

Redis an in-memory database is used to store the activity feed, sessions and other app’s real-time data.

Memcache an open-source distributed memory caching system is used for caching throughout the service.

Data Management in the Cluster

Data across the cluster is eventually consistent, cache tiers are co-located with the web servers in the same data center to avoid latency.

If you wish to understand data consistency models, CAP Theorem and more. Check out my web architecture course here.

The data is classified into global and local data which helps the team to scale. Global data is replicated across different data centers across geographical zones. On the other hand, the local data is confined to specific data centers.

If you wish to understand how cloud deploys workloads globally across availability zones and data centers, how clusters work, and more. Check out my platform-agnostic cloud computing course.

Initially, the backend of the app was hosted on AWS but was later migrated to Facebook data centers. This eased the integration of Instagram with other Facebook services, cut down latency and enabled them to leverage the frameworks, tools for large-scale deployments built by the Facebook engineering team.

With so many instances powering the service, monitoring plays a key role in ensuring the health and availability of the service.

Munin is an open-source resource, network and infrastructure monitoring tool used by Instagram to track metrics across the service and get notified of any anomalies.

StatsD a network daemon is used to track statistics like counters and timers. Counters at Instagram are used to track events like user signups, number of likes, etc. Timers are used to time the generation of feeds and other events that are performed by users on the app. These statistics are almost real-time and enable the developers to evaluate the system and code changes immediately.

Dogslow a Django middleware is used to watch the running processes and a snapshot is taken of any process taking longer than the stipulated time by the middleware and the file is written to the disk.

Pingdom is used for the website’s external monitoring, ensuring expected performance and availability. PagerDuty is used for notifications & incident response.

Now let’s move on to the search architecture.

Unicorn powers search at Facebook and has scaled to indexes containing trillions of documents. It allows the application to save locations, users, hashtags, etc and the relationship between these entities.

These data stores can also be called as documents, which are grouped into sets to be processed by efficient set operations such as AND-OR and NOT.

The search infrastructure has a system called Slipstream which breaks the user uploaded data, streams it through a Firehose and adds it to the search indexes.

The data stored by these search indexes is more search-oriented as opposed to the regular persistence of uploaded data to PostgreSQL DB.

Below is the search architecture diagram

If you aren’t aware of Hive, Thrift, Scribe. Do go through this write-up what database does Facebook use? A deep dive. It will give you an insight into how Facebook stores user data.