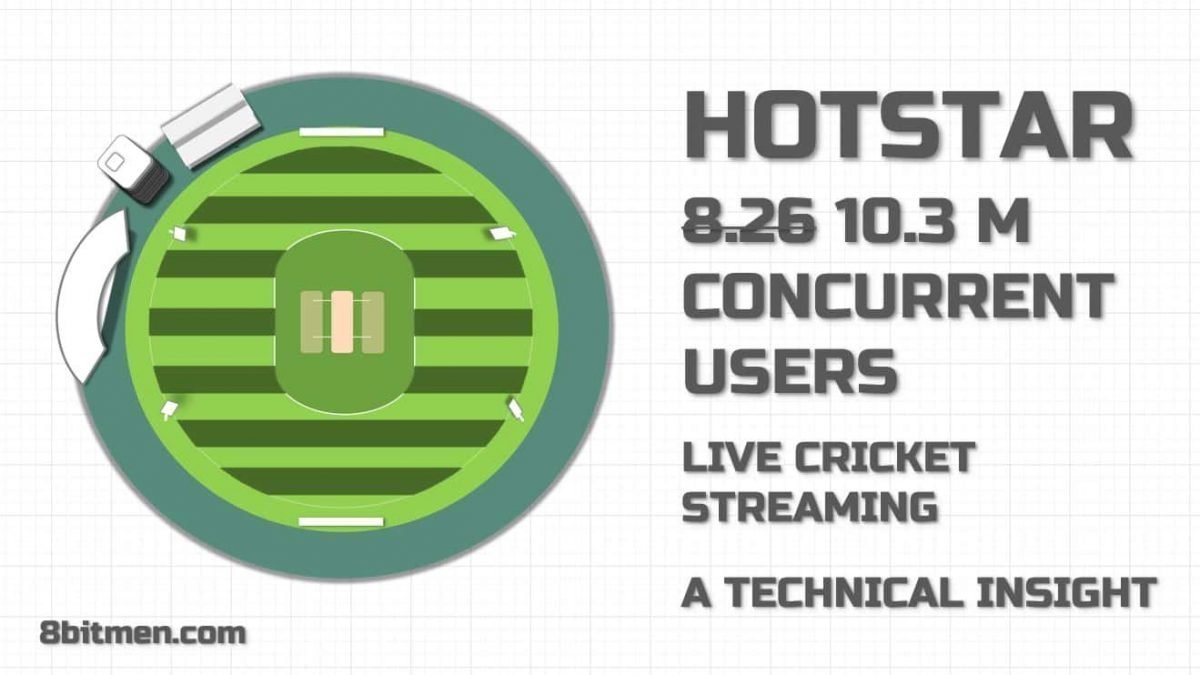 How HotStar Scaled With 10.3 Million Concurrent Users – An Architectural Insight

Hotstar is the leading streaming media & video-on-demand service in India with a user base of approx. 200 million users.

It lets users stream popular shows in several different languages & genres over the web. But the primary, the most popular feature of the service is the streaming of live cricket matches. This is the real deal.

To my knowledge this is the most intense concurrent traffic load on any service, surpassing Fortnite which clocked a load of 8.3 million concurrent players in recent past.

All the traffic is served by the EC2 instances & S3 Object store is used as the data store.

The services use a mix of on-demand & spot instances to keep the costs optimized.

Running machine learning & data analytics algorithms on spot instances helps the business cut down costs by quite an extent.

Terabytes of data in double digits is generated in any regular day and is processed by the AWS EMR Clusters.

AWS EMR is a managed Hadoop framework for processing massive amounts of data across the EC2 instances. Other popular frameworks like Apache Spark, Presto, HBase etc. can also be used with AWS EMR.

2. Infrastructure Setup for Load Testing the Platform for the Big Event

Speaking of the infrastructure setup for the load testing of the platform. It is 500+ AWS CPU instances which are C4.4X Large or C4.8X Large running at 75% utilization.

The engineering team makes intelligent use of spot & on-demand instances to keep the costs low.

Zero to Software/Application Architect learning track is a series of four courses that I am writing with an aim to educate you, step by step, on the domain of software architecture & distributed system design. The learning track takes you right from having no knowledge in it to making you a pro in designing large scale distributed systems like YouTube, Netflix, Google Stadia & so on. Check it out.

The engineering team started with a very basic traffic model, hitting the API endpoints with a certain ratio of requests. Performed some initial runs.

There are typically two types of user interactions with the system; Users who have already signed up & are logging in & the users visiting the platform for the first time.

Keeping all the different user navigation scenarios in mind the team prepared a traffic model of the system.

Now the time was to introduce spikes in the model over the entire testing phase.

A few tools that were used to write simulation are Gatling, Flood.io;

It was preferred over JMeter, which is a pretty popular testing tool, due to its capability of simulating more concurrent users at one point in time.

The simulation ran on an AWS distributed cluster & simulated 20 million users out of which 4 million were concurrent.

Another cloud-based testing tool Flood.io was used with Gatling for load testing.

All this test setup matured with the data obtained as the real cricket matches happened.

There are primarily two triggers to scale; Traffic-based & Ladder based

Traffic based scaling simply meant add new infrastructure to the pool as the number of requests being processed by the system increases.

This works with unpredictable workloads & for services which provide all the stats in detail. They expose the number of threads created; requests processed etc.

Ladder based scaling is preferred for services which do not give much detail on the processes. For tackle this, the team has pre-defined ladders per million concurrent users.

As the number adds on, new infrastructure is added to the pool. This technique works well for a predictable load.

The team has a concurrency buffer of 2 million concurrent users in place as adding new infrastructure to the pool takes around 90 seconds & the container and the application start takes around 75 seconds.

To beat this delay, the team has a pre-provisioned buffer. This buffer approach is preferred in contrast to auto-scaling. It helps the team handle unexpected traffic spikes without adding unnecessary latency to the response.

They have developed an internal app called the Infradashboard which helps them take these scaling decisions smoothly & quite ahead of time.

Protocols are in place which come into effect when the backend is overwhelmed with requests & the application client experiences increased latency in response.

Client avoids burdening the backend servers even more in these kinds of scenarios by increasing the time between subsequent requests.

Caching & intelligent protocols are in place to enhance the user experience.

Popularity attracts unwanted attention. The application with a combination of whitelisting and industry best practices drives away nefarious traffic as soon as it is discovered avoiding the burden on the servers.

4.4 Do Not Do Real-time If It’s Not Business Critical

Recently Hotstar introduced a play-along feature, where the users can interact with their folks, play trivia & stuff on the same platform watching cricket. This feature being real-time spiked the concurrent traffic load on their backend servers.

All these experiences are pretty insightful & help us plan, design & execute in a better & informed way.

Source for this write-up;